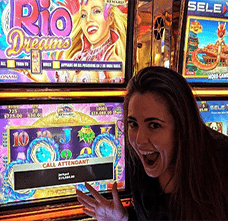 Whether in the real-world or online, slot machines are always a fan favorite. This is likely because there is a possibility of hitting it big, but the stakes for the player are pretty low. Add in progressive jackpots, and a single spin can payout millions.

If you aren't familiar with a progressive jackpot, it is when the jackpot on a particular slot game increases each time there isn't a winner. A tiny sliver of each spin is reserved for the jackpot, the longer a losing streak keeps going, the more money the winner will eventually hit. 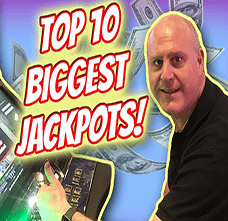 With the ever-growing popularity of online casinos, the capacity for huge wins just keeps growing. These virtual gaming sites are even rivaling the Mecca of the gambling world: Las Vegas. And there have been some pretty big wins recorded already!

The greatest online slot win (so far) went to a British gamer who landed himself a prize of over 13 million Euros playing the Mega Moolah slot. There was also an Australian player that hit a $10 million (AUS) jackpot on the discontinued Dark Knight slot. One casino made millionaires out of several players including one who took home $3 million playing the Millionaires Island game.

The virtual gambling world is getting ever bigger, but the biggest wins (so far) still belong to Vegas! These monstrous wins are all due to the Megabuck slot machines that dot the state of Nevada. The network of more than 700 machines form one mega-progressive jackpot that can make people filthy rich.

Megabuck machines had their first crazy high jackpot back in 1998 when the total reached $20 million for the very first time. The winner accidentally wagered $300, but it worked out okay because they took home a pretty impressive payout. Another winner took home $21 million from a $10 spin!

One story that deserves to be told is that of Elmer Sherwin, the Megabucks winner that took home over $4 million in 1989. Sherwin played again when he was 92, and on that occasion, he hit a $21 million progressive jackpot! What a lucky guy, right? He gave away most of his winnings.

A very lucky software developer hit the unfathomable jackpot of $39 million while playing the slots in Vegas. Just 25-years old, this winner wagered $100 and got the payout of a lifetime. There was also the woman who skipped breakfast to hit the machines and walked away with a $22 million prize. She says she initially thought the payout was just $2 million but was pleasantly surprised to see all those extra dollars.

Slots for the Win

Trying your luck at the slot machines is a great way to start your online gaming journey. The stakes are pretty low, but if you hit a progressive jackpot, you can really rake in the winnings.